The Club again fielded eight teams across the competition, catering for the wide-range of competitive abilities we have among our tennis members.

Congratulations to everyone who took part, a big thank you to the respective captains for their organisation throughout the season – and a special well done to the three teams that claimed the title in their division!

Here’s a recap of how all our teams fared in their divisions. If you’d like to be involved in future competitions, please contact the Club.

SSC’s top-ranked men’s team finished the season in fourth place in the Premier League competition, registering four wins, five losses and a draw over their season.

Led by John Field, the 1’s played Sydney University in the play-offs but went down 9 sets to 5 to maintain their fourth-place finish.

Our 2’s side just missed out on a spot in the finals, finishing the season a respectable fifth in the Men’s 1.1 division after notching 6 wins, 6 losses and 2 draws.

Director Mark Padd was the mastermind behind this side, that have stepped up a class in recent times and no doubt they’ll be back stronger next season.

It was a tough season for our 5’s, who struggled to step up to the grade this season, finishing bottom of the Men’s 1.2 league.

There were encouraging signs at various stages for the Peter Davis led side, but perhaps they’ll be eyeing a fairer grading for next season.

SSC’s 7’s enjoyed a tremendous campaign in the Men’s 1.5 division, topping the standings at season’s end with 12 wins and just 2 losses.

Unfortunately the Charles Hempel led side were unable to replicate that form in the finals, going down to Chatswood 5 sets to 1 in their semi-final on home turf.

The 4’s also enjoyed a stellar season in the Men’s 2.3 league, with their record of 10 wins, 3 losses and 1 draw also seeing them finish as minor premiers.

Led by Director Daryl Hart, the team maintained their dominance in the finals, beating Hunters Hill in a tightly-fought decider 5 sets to 3.

It was an all Strathfield affair in the Men’s 2.4 division final, after the 6’s finished the regular season on top of the standings.

Captain Steve Chen reports the entire team contributed to their success across the campaign and that there was a great atmosphere for the decider.

In the end, the MVP pairing of Changhoon Nam and Mrigesh Tamang proved to be the difference, claiming a perfect 4 out of 4 sets.

Strathfield 3 pushed their opposition all the way but the 6’s were triumphant 6 sets to 2 – though SSC was the real winner! 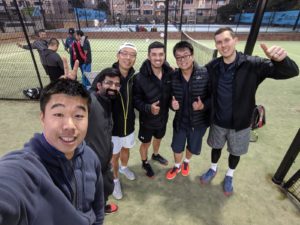 The 3’s experienced an up-and-down campaign, according to captain Robert Moe, finishing in third spot, with 7 wins, 4 losses and a draw.

Undoubtedly the season highlight was knocking off the highly fancied Ryde-Balmain outfit 6 sets to 2 in their semi-final.

However, as previously indicated, they ran into a red-hot 6’s team in the final and finished runners-up in the Men’s 2.4 division.

Last, but certainly not least, our 8’s undoubtedly produced the comeback of the season to claim the silverware in the Men’s 2.6 division.

The Phil Lowe led side were behind the 8-ball from the start of the season, with 3 wash-outs and a bye leaving them teetering at the bottom of the table after the early rounds.

The team were able to put some solid wins together as the season progressed but with 3 rounds remaining, they found themselves still in second-last on the standings.

However, after winning their remaining three ties, the 8’s were remarkably able to climb their way up to second come season’s end.

The team were convincing 7 sets to 1 winners against Mosman in their semi-final, while an upset in the other semi meant SSC would host the final against Joeys.

The 8’s eased their way to a 5 sets to 1 win in the decider, with the 3 David’s (Rutherford, Tilston and Hansen) and Ping Huang combining for the win.

Unfortunately an injury again cruelled Phil Lowe’s season, but David Hansen proved to be a more than able back-up.

Phil would like to send a special shout-out to Coach Mac Lim, whose rigorous training regime had the team well prepared for tournament tennis and contributed significantly to the team’s success. 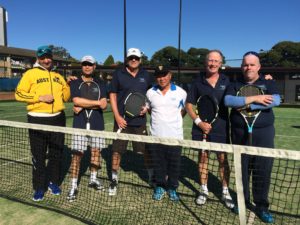 For a detailed break-down of results for all of SSC’s teams that competed in the Spring Badge season, head to leagues.tennis.com.au and search for Strathfield Sports Club.